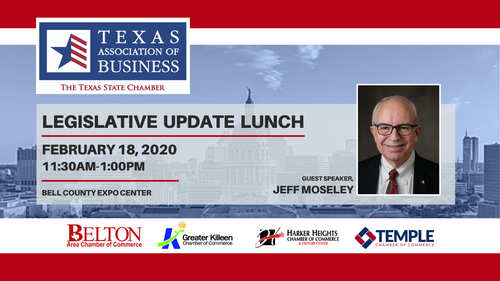 Legislative Update Lunch.
Updates on Texas Legislature, USMCA and what it means for Texas, Federal issues and TAB priorities.

About Jeff Moseley
Jeﬀ has four decades of public and private sector experience, particularly in the transportation industry and economic development. Currently, he serves as the Chief Executive Oﬃcer of the Texas Association of Business, the largest business association in Texas, the most inﬂuential voice for
public policy issues aﬀecting business not just in Texas, but nationally and internationally too.

Most recently, he served as state Vice President of Government Aﬀairs for Texas Central Partners LLC, a private company developing a new high-speed rail system between Houston and Dallas/Fort Worth.

Before that, Moseley was appointed by former Texas Governor Rick Perry ® to the ﬁve-member Texas Transportation Commission, which oversees the Texas Department of Transportation (TxDot) and a $12 billion annual budget.

Previously, Moseley was President and Chief Executive Oﬃcer of the Greater Houston Partnership (GHP), the primary business organization for the 11-county Houston region. Under his leadership, the GHP gained national recognition as a center for economic development and became the largest chamber of commerce in the Lone Star State.

Moseley was elected to county oﬃce and served as Denton County Judge and Justice of the Peace before joining the
Governor’s oﬃce. He was elected to three terms as County Judge and managed to reduce the ad valorem tax rate while piloting one of the fastest growing counties in the nation. As a County Judge he also founded North America's Superhighway Coalition (NASCO), an advocacy group for a safer, wider, cleaner, stronger Interstate 35 corridor; members included rural, urban, bi-partisan elected oﬃcials from Mexico.

Moseley is a sixth generation Texan and graduate and Outstanding Alumnus of Southern Nazarene University in Oklahoma, He is married to Jackie Barret of Comanche, Texas and they have two daughters, Joi and Jenni.